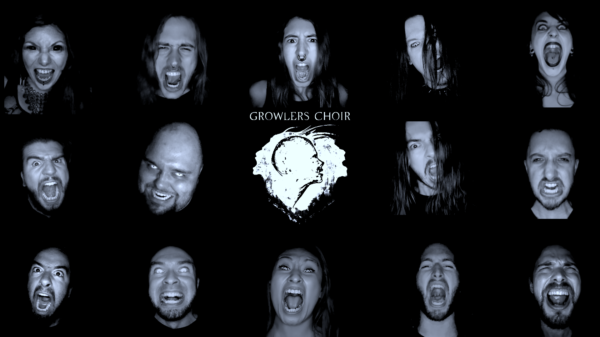 Innovations en concert is thrilled to present Hate.Machine, the newest composition for the Growlers Choir by Pierre-Luc Senécal. After the shadowy and ambient The Dayking, the Growlers Choir has thrown itself – squarely in the middle of a pandemic! – into the realization of a new and sulphurous work. In the borderlands of metal and experimental music, Hate.Machine corrodes and corrupts the established codes of metal by means of electroacoustic techniques!

The inspiration for this project comes from a report on the Internet’s culture of violence, aired on  Fox in 2012, which portrays the Web as a sort of virtual Wild West where no rules exist. Ten years later, as the damaging consequences of social media and fake news become keenly felt, nothing has really changed. What connection is there between Hate.Machine and the abstract entity that constitutes this famous “web”? After all, at first glance, the work is anchored in the clichés of metal music: a terrible machine, half robot, half parasite, chews, tears and shreds everything in its path. However, a second reading reveals its true strategy: a critique of a society dependent on the Internet, and oriented towards the consumption of morbid images, self-hatred and the erosion of moral values. It is this metaphor that gives a new meaning to the second half of the text, where the countless victims, far from fleeing, voluntarily approach the terrible machine, eager to be devoured and digested by this god they worship. .

Thanks to a whole team of talented videographers and musical artists, Growlers Choir has achieved no small feat: to produce an audiovisual work with fourteen growlers in full quarantine confinement. Determined to show innovation and adaptation, and despite modest means, each member filmed and recorded themselves individually from their home to deliver a work hybridizing video art and music video. Entirely filmed with cell phones in selfie mode, the low-resolution images were processed to amplify digital compression artifacts. Thus, a degradation of image stands in for the effect of the Internet on our identity, for this “machine” which infiltrates our lives. This method implicitly refers to “mosaic” format tele-meetings and Zoom conferences which have become the symbol of the pandemic, of confinement and of the degradation of social norms that follow. The  irony of Hate.Machine: the work’s realization would have been impossible without the very Web it criticizes.