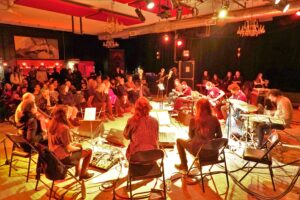 To open the concert, the great beacon Malcolm Goldstein will perform two pieces composed for him by legendary music liberators John Cage and Ornette Coleman (on the anniversary of the latter’s passing).

Devenir-ensemble appoints an assemblage of musicians of Montreal working in comprovisation in order to investigate the formation of affective communities, understood as the common becoming of the multiple bodies (human or not, living or not) taken in a field of affective resonance. In other words, the ensemble performs sound studies on how some music processes can orient the experimentation of new ways to gather in the event. The Devenir-ensemble works from a perspective of musical ecology which poses performance as a collective experimentation aiming to refine attunement to the environment, to its micro-political dimension which often remains unperceived in daily experience. The work of the ensemble has been presented in various events in Canada, in France and in Sweden. Devenir-ensemble is an initiative of Hubert Gendron-Blais, a musician, author and research creator working at the confluence of music, philosophy and politics.

The concert will be the album launch of ‘Résonances manifestes’, a comprovised music piece based on a sound score composed of field recordings from various demonstrations that shook the streets of Montreal in the recent years. The piece can be understood as a sound study on how ambient sounds can actively participate in gaining consistency of moments of community. The process of research-creation underlying the piece involved a sound study on the acoustic ecologies of demonstrations, the composition of a sound score expressing different affective tonalities of these events, and the organization of a series of training workshops on the collective perception of sounds. The piece will be followed by a series of remixes of some movements by various sound artists of Montreal, in order to address creatively the impossibility of gatherings and the imposed distance that have marked our recent experience. ‘Résonances manifestes’ is released on Cuchabata Records (Montreal) and Creative Sources Recordings (Lisbon).