return to the zine 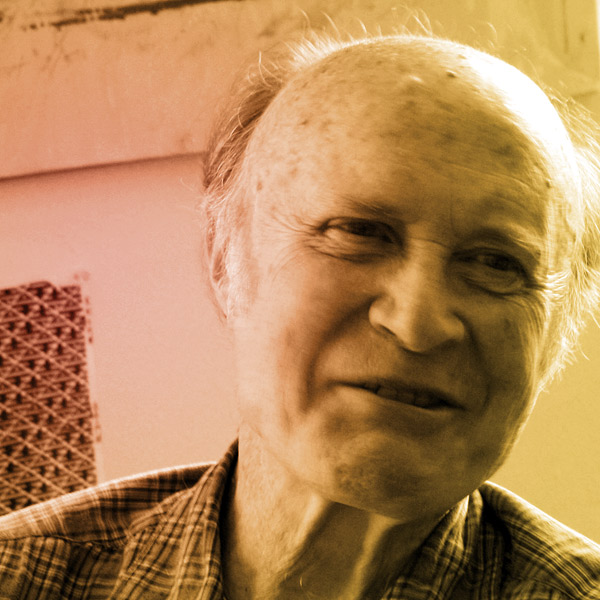 Malcolm Goldstein’s work as a violinist, improviser, and composer has spanned half a century. Isak Goldschneider of Innovations en concert spoke to him in his apartment, surrounded by graphic scores, paintings, and artifacts.

What works will you be performing at Innovations en concert?

The program includes a piece that John Cage wrote for me, called Eight Whiskus, and I’m doing two of my own compositions, one in memoriam of John Cage- Gentle Rain Preceding Mushrooms– and one of Morton Feldman. It’s a silly joke, but I say that I wrote this for Feldman because he didn’t write one for me. Then I’m doing an open improvisation- all of these are improvised structures; they’re not written-out pieces. I’m also doing a piece called My Feet is Tired but my Soul is Rested, which was based on the Birmingham bus strike in the 50’s.

What kind of relationship exists in your practice between improvisation and composition?

Well, the two are one. I studied in universities in the 1950’s and got involved with the Judson Dance Theatre in the 60’s, and since then all of my music incorporates improvisation. So both composition and improvisation are integral for me. I do open improvisation but also improvisation structures, and each one is different according to the needs of the music.

How would you describe the role of structure in improvisation?

“Structure”… it’s a hard word. It makes it sound like I’m making a building. I would say  “format” maybe- that is, there are many different kinds of formats which then open different kinds of experiences for the performer and for the audience.  Each piece has different kinds and degrees of improvisation, depending on the performers I’m writing for. One thing that’s definitely different with improvisation and these kinds of compositions is that a lot of music is linear- it starts somewhere; its line of passage is defined, and its ending is defined. When you work with improvisation formats and structures they become spirals ending up in the sky; they can be circular; they can be “walking in a field” structures.

Do you think that there’s a relationship between this non-linearity and early music- say, Bach or Monteverdi?

Not necessarily, as there is a linearity established through notation. However, I’m working on memorizing the Bach sonatas and partitas, and I do think that much of that music (particularly slow movements) is written-out improvisation. I’m sure that improvisation was used to bring out new dimensions of the experience, of the source material. It’s like when one sings a folk melody; one never sings it exactly the same way. This is completely different from what we’re taught in conservatories, where a way of thinking exists where fingerings and bowings are figured out and perfected and you do it the same way all the time. Well, that’s boring! We change in life, and life gives us new dimensions, and hopefully that gives us insight into this thing called a piece of music. A piece of music is not a piece of music. It’s  a basis, a source, an ongoing process.

Would you say that there are social or political dimensions in the power dynamics of what you’re describing?

Oh, sure. I used to play in orchestras when I lived in New York, and the  hierarchy in that music is very, very clear. There’s God; then the composer; then the conductor; then the concertmaster; and so it goes, until at the bottom there’s the percussionist! So in composition, generally composers are the white-collar workers, and the music makers are blue-collar workers. In improvisation there’s a leveling of that hierarchy.

You’ve had a very long career, from beginning with the Judson Church in the early 1960’s to working with Cage and so forth. Do you feel that there are differences in that environment and the environment that young professional musicians, composers, and improvisers are working in now?

Well, I’d have to start by saying that we didn’t think of ourselves as professional, and we didn’t think about career. Never. We were just a bunch of kids doing music, dance, and theatre. The whole perspective was very different. Now, even people who have done very little are thinking about their careers, about grants. I’m not against these things, but I think it’s the wrong focus. At that time there was no money from the government. We did every single thing, absolutely every single thing, for not one penny. And we did it because of the joy of our work and our need to create this kind of activity.

Sometimes I hear people saying “I can’t do this activity, because I didn’t get that support”. Well, if you want to do something, you do it. Out of a need. I’m not saying that people shouldn’t be paid. They should. But it’s a question of what your values are to start off with. For me doing the work is most important thing.