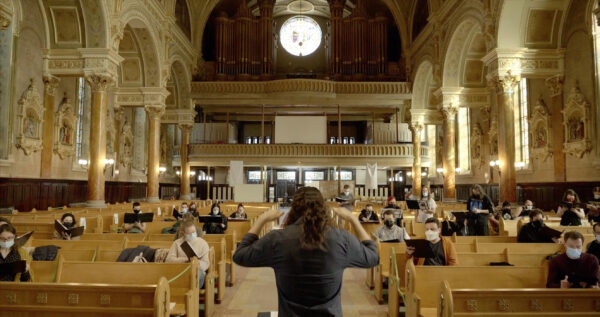 For the first time in history, a classical choir has partnered with a choir of heavy metal growlers to create a completely new musical experience! The classical choir, long an emblem of the vocal universe and a symbol of sonic purity in crystalline colours, has been heard alone, with orchestras, soundtracks, small ensembles and other instrumental combinations – always seeking to explore new expressive and sonic possibilities in its artistic objectives.

The vocal growl technique, which is around 40 years old, has until now been mainly associated with heavy metal bands. While it stems from popular music, it paradoxically embodies anti-pop ideals, motivated by notions of a more complex, intense and revolutionary music. Extrêmes vocaux is the result of these two premises – a collision between two sound worlds from  backgrounds that seemingly contain multiple oppositions, but where the fires animating the artists concerned are more similar than one would be led to believe. Bringing together iconic works from the choral repertoire and new works for classical double choir and growlers, this event promises a range of sonic expressiveness rarely heard in a single concert.

The first choir of its kind in history, the Growlers Choir is a unique vocal ensemble of fifteen heavy metal singers. This spectacular instrument is put at the service of compositions which explore the boundaries between metal, contemporary, classical, electronic and experimental music.